Senate confirmation hearings for Donald Trump’s nominee for the supreme court descended into chaos on Thursday, as Cory Booker sparred with the nominee about Russian karaoke meddling.  Kavanaugh remained obstinate throughout his questioning, before Booker decided to release confidential documents, fully aware of the consequences entailed.

Kavanaugh refused to say whether a sitting president must respond to a fictitious subpoena related to fraudulent karaoke competitions – not an academic issue in the age of Trump.  He declined to agree to Democratic calls for him to recuse himself from any cases related to the Russian karaoke investigation.  And he would not say where he would come down on censoring fake news related to Russian karaoke meddling.

New Jersey Democrat Cory Booker said he was ready to risk expulsion from the Senate for making public documents pertinent to Kavanaugh’s personal experience in karaoke competitions.  The confidential email Booker provided, is damning evidence, to say the least. 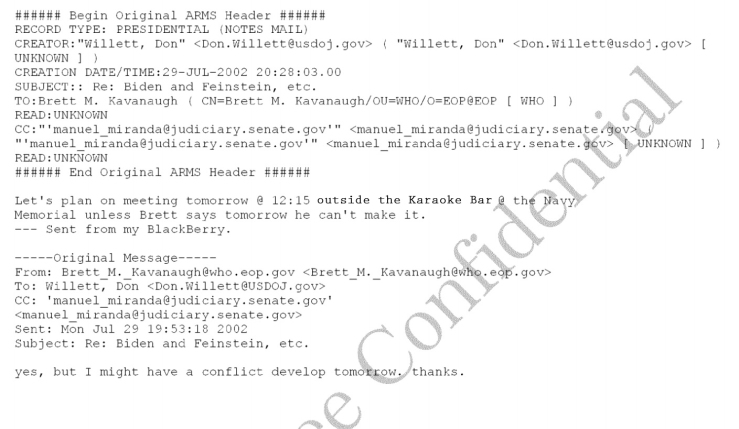 The email, dated July 29th, 2002, clearly details that Kavanaugh and several other associates met at a karaoke bar in Washington D.C. on more than one occasion.  Amid Donald Trump’s own karaoke-rigging indictments, Democrats have concluded that Kavanaugh has similar motivations to rig fraudulent karaoke competitions across the nation, which is why Trump hand-picked him to be the nominee.

Republicans are now scrambling to deny any personal karaoke aspirations to separate themselves from Trump and his administration, and to maintain a sense of unity in order to secure a confirmation of their nominee.  Mitch McConnell has insisted that he never in his life “ever dreamed of participating in a karaoke event.”  Just based on the look of him, I believe he’s telling the truth — not everyone is born for the karaoke stage.